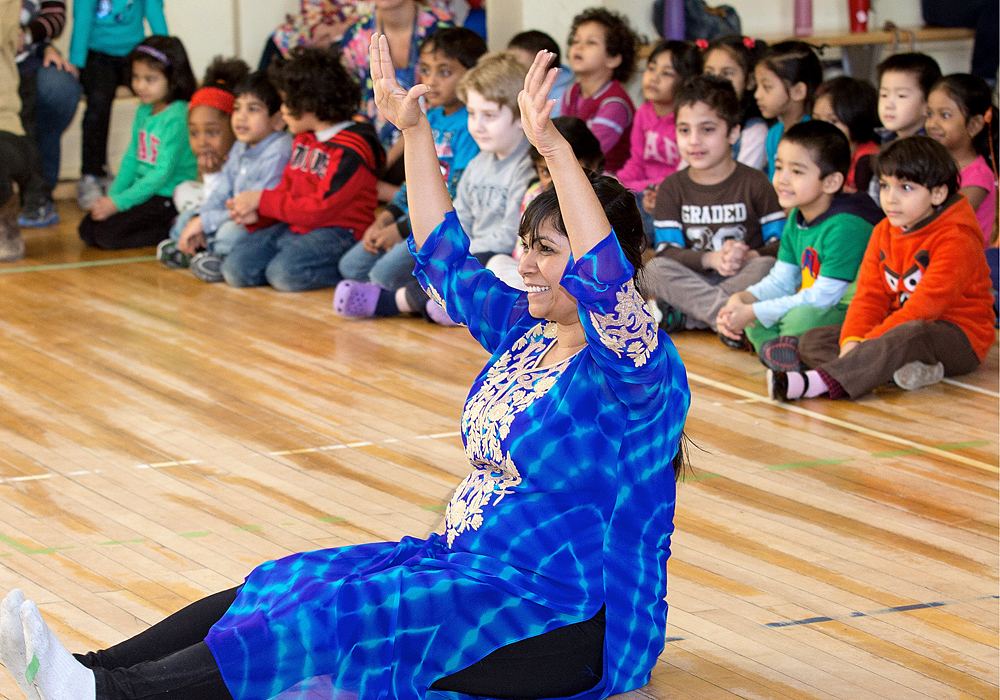 In performances, or in collaborative hands on classroom visits and interdisciplinary residencies, our award-winning artists truly enjoy engaging children and educators in dynamic, interactive learning opportunities that explore world oral cultural traditions. Many of our veteran artists are also mentors to our emerging artists including their own offspring, contributing to a lasting legacy of traditions that continue to be passed on from generation to generation.

Scroll down to read our artists’ stories.

Puja Amin has toured the world as a dancer and choreographer, and has worked on a number of Bollywood films, theatre and TV productions… read more

Njacko Backo is a percussionist, singer, storyteller, choreographer, songwriter/composer who has been performing for children and adults since his childhood in Cameroon… read more

Mariella Bertelli has been telling stories for a long time and also worked as a children’s librarian for 22 years. Her love for children and their right to literacy has brought her to the island of Lampedusa… read more

Trinidad born author and storyteller Rita Cox has received the Order of Canada for her active role in promoting storytelling, multicultural education and literacy… read more

Originally from Cape Town, Jim Gelcer is an internationally acclaimed musician, composer, and producer who has recorded and performed around the word… read more

Andrea Haddad finds that the excitement of French folk music and dance can be transformed easily into enthusiastic language learning. She has lived in Quebec, Switzerland and France … read more

A native of Trinidad, Muhtadi Thomas is one of Canada’s leading percussionist and founder/artistic director of Muhtadi’s International Drumming Festival… read more

Hannah Naiman has been dancing for more than 20 years and teaching and leading folk dances for over 6 years. She looks forward to introducing first time dancers to the joy and delight that comes from dancing together to traditional dance tunes… read more

Esther Osche is a master storyteller and teacher of local history in Birch Island (Manitoulin). She visits schools and libraries sharing stories of the Ojibwa people… read more

Award winning bilingual musician and songwriter Chris Rawlings was born in Montreal and now makes his home in Toronto. Either on his own or, with MITS friends… read more

Kathy Reid Naiman is an award-winning musician, recording artist and arts educator for children. She is dedicated to bringing quality musical experiences to young children as well as their caregivers, parents and teachers…. read more

Bill Russell is known for his ability to get his audience involved and participating. Bill’s recordings, workshops and concerts draw upon the Cajun and Creole traditions of his native Louisiana… read more

With deep roots in the African oral tradition of the griots, Michael St. George is a multi-media performance dub poet. A native of Jamaica and inspired by his working-class upbringing, Michael focuses his work on the themes of justice and social equity… read more

Ken Whiteley is a multi-award winning artist and is known as one of Canada’s pre-eminent performing roots music artists. He is regarded as a playing encyclopedia for his vast repertoire and his command of a wide variety of styles… read more

Sandra Whiting has been at the epicenter of activity and change in Toronto’s African Canadian community for over twenty years. She has worked with the Ontario Black History Society, Jamaican Canadian Association, the Caribbean Cultural Committee… read more

Award winning author and storyteller, Dan Yashinsky has been a storyteller for more than thirty years. Drawing on his own crossroads heritage (Jewish, Turkish, Romanian, American, French) and the unforgettable stories collected on his travels… read more